If you are a beginner motorcyclist, there’s a good chance that you will want to kick-start your dirt bike at some point. This can be an intimidating process, especially, if you’ve never done it before.

In fact, It’s recommended that you have someone mentor you through your first few times until you get a hang of it. But, here are some basics to get you started.

First, assess the situation. You want to be sure that the ground underneath you is firm enough to support the weight of both you and your bike–you don’t want to sink into the mud or slip on gravel.

Then take a seat on the bike and in one smooth motion, push down on the left pedal with your left foot while swinging your right leg over the back of the seat.

Again, finding that sweet spot between too much pressure and too little pressure is the key factor in kick-starting your dirt bike.

You’ll find more informative tips and tricks to help help you get started with kick-starting your dirt bike.

What Do You Need Before Kick-Starting A Dirt Bike?

The first thing you need to do is to check the gas and oil levels on your bike. You wouldn’t want to run out of fuel in the middle of nowhere, would you?

Make sure that the tires are inflated properly and that there is no dirt or debris obstructing the wheels. It is also important to check the brakes before starting off.

Once you have made sure that everything is in order, you can start the engine by kick-starting it. To do this, place your left foot on the left side of the bike and push down with all your might.

At the same time, use your right hand to twist the throttle open. As the engine starts, release the throttle and let the bike warm up for a few minutes.

How To Kick Start Your Dirt Bike?

It’s easy to forget how important it is to know how to kick-start your dirt bike. After all, if the engine is already running, why would you need to know how to do it?

However, there are times when knowing how to properly kick start your dirt bike can be the difference between getting where you’re going and being stranded.

There are two different types of kick starters on dirt bikes, one type is manual and the other is electric. If your dirt bike has an electric start, it’s still a good idea to know how to use the kick starter in case the battery dies or something else goes wrong.

To kick start a manual dirt bike, you’ll need to locate the kick starter lever. This is usually located on the right side of the bike near the footpeg. Once you’ve found the lever, place your foot on it and push down. The engine should start within a few seconds.

If your dirt bike has an electric start, locate the start button. This is usually located on the handlebars near the throttle. Once you’ve found the button, simply press it and hold it for a few seconds. The engine should start within a few seconds.

Have you ever gone to start your dirt bike, only to find that it won’t turn over? If so, you’re not alone. Numerous factors can contribute to a dirt bike that won’t start, ranging from old or bad gas to a faulty spark plug. 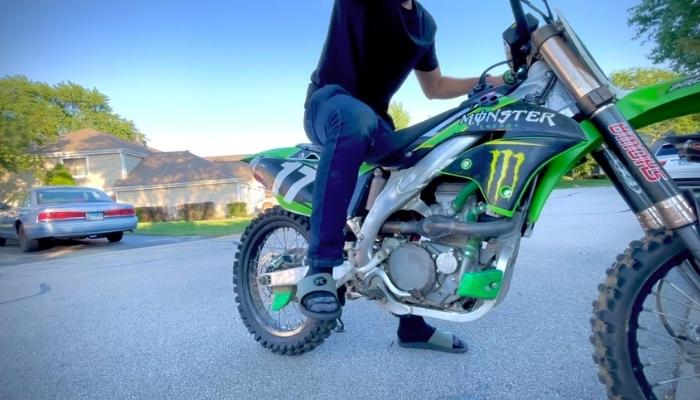 One of the most common reasons why a dirt bike won’t start is because the fuel is old or has gone bad. This is particularly common in older bikes that have been sitting for a while.

The first thing you should do if your bike won’t start is to drain the gas tank and refill it with fresh fuel.

Another common reason for a dirt bike that won’t start is a faulty spark plug. If the spark plug is old or dirty, it won’t be able to create a spark and the engine won’t start.

The best way to test a spark plug is to remove it and examine it closely. If it looks old or damaged, it should be replaced.

If your dirt bike still won’t start after checking the fuel and spark plug, it’s possible that the problem lies with the carburetor.

The carburetor mixes air and fuel together and delivers them to the engine. If the carburetor is dirty or damaged, it won’t be able to do its job properly and the engine won’t start.

Finally, if all else fails, it’s possible that the problem is with the engine itself. If the engine is seized or has other internal damage, it won’t be able to start no matter what you do.

In this case, the only thing you can do is take your bike to a mechanic and have them take a look at it.

If your dirt bike won’t start, don’t despair. By troubleshooting the problem and ruling out each possibility one by one, you’ll eventually find the cause of the issue and be back on the trails in no time.

What to Do if Your Dirt Bike Won’t Start?

Make sure you have enough fuel in the tank before trying to start the bike again.

If the fuel is fine, the next thing to check is the spark plug. The spark plug ignites the fuel in the engine, so if it’s not working, the bike won’t start.

Check to see if the spark plug is wet or dry. If it’s wet, it may be fouled and need to be replaced. If it’s dry, you may need to clean it or replace it.

If the spark plug is fine, the next thing to check is the battery. The battery provides power to the spark plug, so if it’s dead, the bike won’t start.

Try charging the battery or replacing it with a new one.

If none of these things fix the problem, you may need to take the bike to a mechanic for further diagnosis.

The Common Mistakes People Make While Kick-Starting Their Dirt Bikes?

By following these safety tips, you can help ensure a fun and safe experience while riding a dirt bike.

If you are looking to start riding dirt bikes, then it is important that you know how to kick-start one. The above-mentioned guidelines and tips have outlined the process of kicking a dirt bike into life.

With a little bit of practice, you will be able to do it like a pro. Remember to always wear protective gear when riding, and have fun.